I’ve known about Birmingham Wheels raceway for a while, it’s a small, rundown oval racetrack just outside of the center of Birmingham. It’s mostly nowdays used for drifting, as well as banger racing, oval racing and lower league mini racing.

There’s a small orginisation called Learn 2 Drift which will teach you how to basically drift a car in a very safe manor under professional supervision. I know both the owner and one of the tutors who work with the Learn 2 Drift team. Owner: Andy Arnott Instructor: Callum Craddy. They travel across the country teaching people how to drift in their fleet of cars. Such as Birmingham Wheels, Santa Pod, Brands Hatch, Skegness, Rockinham Raceway and Teeside Autrodome.

I think I could easily get access to photograph one of their tuition days and photograph the workers, students, pit crew and marshalls.

I don’t really know much about either city, I’ve been to Birmingham twice once was just to go on a date to Five Guys, and the other was to go to a Motorcycle show when I was 13 at the NEC with my father. I’ve been to visit Jess down in Bristol before which was alot of fun, but I still don’t know a thing about it, other than it’s a hipsters paradise. I blogged about it on my main blog here: http://crossshots.wordpress.com/2014/02/28/bristol-hipsters-paradise/

I’ve only been Wales once too, which was with my primary school to go to Trewern. So for some crazy reason, I want to go to Cardiff. Throw myself in at the deep end. It’s the city I know the least about and i’m really intrigued to learn more about it.

All stereotypes are based on truth.

Here’s a few ideas I had dotted down in my notebook.

I’m really keen to elaborate on the Valleys idea, as I come from Essex and have seen first hand the switch and changes going on in the youth of today because of programs such as The Only Way Is Essex. You cant walk down a street in Essex without seeing a quiff or impeccably clean trainers nowadays. Everyone back home wants the “Towie” lifestyle too, posh cars, excellent social life and a hot girlfriend, all because of a little TV show which exploits the stereotypes of people from Essex. Has this change happened in Wales too? The Valleys TV show has been on MTV for a while now, surely there must be a small group of people who think that making a fool of yourself on television and getting drunk is a perfectly good lifestyle.

I then googled what there was to do in Cardiff and dotted down a few of my favorites.

The one I am in favor of doing the most is the Cardiff Community Garden. It’s been done before by a photographer Tom Ashmore which made it onto the Guardian in May 2011. Which can be seen here http://www.theguardian.com/cardiff/2011/may/16/riverside-community-markets-association-pontcanna-allotments-cardiff-about-tom-ashmore and here http://tomashmore.uk/A-Roots-Union

So far the community garden seems to be the one I favor most. I am going to email and Join the Facebook group and hopefully try to make contact and ask to come along for a few days. Unless I can photograph in Five Guys, Birmingham. I love Five Guys.

Richard Avedon has to be one of my all time favorite photographers, up there with James Nachtwey and Don McCullin. I’ve been a fan of his work since I first saw his ‘In the American West’ series in the first year of college. My old college tutor Simon Rowe showed me a bit of his work which we needed to research for out Portrait module. From then on, I have been a fan of his simplistic approach and style in the way he photographed this series of images.

In the American West is a series of portraits of “ordinary” American people from 1979 – 1984 which shows a photographic record of miners, drifters, oil patch workers, slaughterhouse workers and other marginalized folk throughout western America. The harsh realism of these portraits of the western people provides a powerful, if bleak, record of working life in the region.

I love the way it’s shot. Plain white backdrop, natural sunlight exposure with strong think contrast, which portrays and highlights the emotion of the sitters, mixed with the everyday work clothing (or lack of) brings out the stark reality of the times that they live in.

The series was shot on 8×10 large format film and was photographed in a very simplistic manor, with just a white backdrop taped onto the wall of a barn/shed/house using only natural sunlight to illuminate the subjects.

Last year I tried to recreate Avedons style of work in the Studio using a single overhead softbox. It didn’t quiet go to plan, but I do like the results. 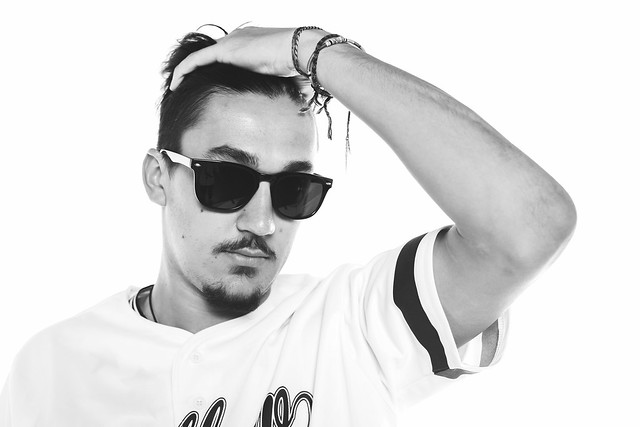 If I were to get it spot on, I would need to separate Conor from the background more and also make sure his white top doesn’t fade into the background.

Avedon is still and probably always will be one of my most influences when it comes to portrait photography.